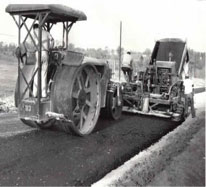 Hinkle Contracting Corporation started in 1942 as Buckner Hinkle and Company, which was a family partnership. The first major contract was for a seeding and fertilizing job for the Bluegrass Ordinance Depot that is between Richmond and Berea, Kentucky. The seeding and fertilizing business grew and work was performed from as far north as Michigan and as far south as Florida and from New York, Delaware and Maryland to as far west as Arkansas and Oklahoma. This type of work continued to the end of the war in 1945 when the business began to make its first change and go into contracting small concrete structures for the Kentucky Highway Department. In 1946 the business moved into the road mix paving operations. The first black top plant was purchased in 1948, which was a portable plant and was moved to wherever it was needed. In the mid to late 50’s the business expanded into rock crushing. On October 1, 1956, the company’s name of Buckner Hinkle and Company was changed and Hinkle Contracting Corporation was formed.

During the 60’s several joint venture partnerships were formed and the business continued to grow in Kentucky and centered on paving, crushing, seeding and fertilizing, and guard rail contracts. In 1969 joint ventures were formed to perform work in Central America. This work comprised of paving contracts for airports and roadways and continued for approximately 10 years.

From the early days of Buckner Hinkle and Company there has been continued growth that has supported the company’s commitment to our employees, our customers and our community.